August 13, 2016
Guest Contributor
EdTech, Elementary, High School
Have you heard about this phenomenon that has taken the world by storm? The media are reporting on the record shattering downloads, and many people are inherently suspicious of this game, because “kids should be outside playing, enjoying fresh air, and not sitting playing video games”. Well, The Pokemon Company and Niantic (the programmers) agree with you! In fact, did you know that Pokemon has been trying to get kids outside for over 20 years? There has always been an aspect of the games that encourages going out, meeting with others, and getting some fresh air.

**PLEASE BE AWARE** This game uses Cellular Data. It uses a relatively small amount, after a week of fairly heavy play, I’ve used less than 200MB. Be aware of what your phone data plan allows!***

So what is Pokemon?

You may have kids that watch Pokemon, you may have even watched it when you were a kid. In case you’re new to the idea here is a quick primer: Pokemon is set a fantasy world where the wildlife are called “Pokemon”. There are different types of Pokemon for different ecosystems (water, grass, ice, flying, etc). There are also humans that have 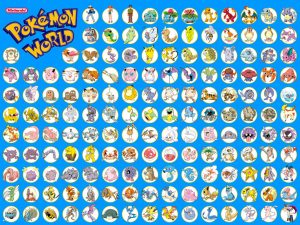 created a method to domesticate and control the wild Pokemon. Some humans keep the Pokemon as pets, some as beasts of burden, and some use them to have battles. This is where the hero comes in.

A Pokemon trainer (in the cartoons his name is Ash), can go on a quest to find all the different Pokemon in the world, classify them, and catch at least one of each kind. Along the way Ash stops at Pokemon Gyms and competes against gym leaders to win badges. Pokemon cannot die, but can faint. They need to be revived and kept in good health, there are numerous Pokemon Hospitals in the world. The point is to learn to be a good steward of the Pokemon you have. Pokemon also can learn new tricks and as they grow in levels and power, can also metamorph into a different version of themselves (ie how a caterpillar changes into a butterfly).

So what is Pokemon Go?

It is a continuation of this fantasy world, while using a technology called Augmented Reality that allows your smartphone camera (iOS or Android) to merge the game and the real world. You remember the human body pages in an encyclopedia? The transparent overlay showed a new layer of anatomy. The same general idea applies here.

This game also integrates Google Maps to allow your physical location to be linked in to the game world. As you walk around, your character moves, and you can interact with certain locations that have cultural or historical value. For instance, in Beacon Hill Park there are numerous memorial benches, totem poles, fountains, and art pieces. These will show up in the game as Poke Stops or Gyms.

Poke Stops are where you load up on goodies. As you approach a stop it will change it’s shape from a square to a circle. Tap it, and swipe the middle circle to spin the picture. This deposits several game goodies onto your screen. Tap them to collect them, and you can continue on your way.

Gyms are where battles are fought. After you reach level 5, you can choose a team. *This team can not be changed later in the game so choose wisely* You can choose Team Valor, Team Mystic, or Team Instinct. They each have a different philosophy, and a different color. You will play with your world wide teammates to take over the most amount of Gyms. You battle a gym that is owned by a different team and if you win you can take it over by adding one of your Pokemon to the Gym collection. Then other teams will battle and try to take it down. This is a feature that not everyone participates in, and you should make the best decision for your family based on your child(ren)s maturity and personality.

So how do I get Pokemon?

As you are walking around (and trust me, you will walk a lot! I’ve walked 46km this week that I’ve been playing!) you will feel your phone vibrate and it will alert you that there is a Pokemon nearby. Rotate your screen to find where the Pokemon is, and tap it. You will then try to capture it by throwing a Pokeball at it. The Pokemon will be various distances and have a variety of difficulty to catch. You will notice two rings around the Pokemon, aim for the coloured ring (Green is easy, Yellow/Orange is hard, Red is very hard), and then wait to see if you’ve caught it. The more you catch the more your character will gain levels, and you will be able to access higher level goodies.

Pokemon is a fantasy world that started as a video game/cartoon franchise. Now you can use your iPhone or Android phone to capture Pokemon in your neighborhood. It is a great way to get out and have some exercise, and something you and your kids can bond over and do as a family.