Learners from the Duncan face-to-face Science 9 class had a unique opportunity this month to increase their knowledge of the local ecosystem with a visit to a local wolf owner and breeder. We were very excited to interact with these amazing animals up close.

We received an enthusiastic greeting from two Arctic Grey wolf cross puppies who at seven months old already weighed in at over 40 kg (88 lbs).  Learners were then able to meet and interact with two adult Timber Grey wolves, Tundra and Snapper. Tundra is no lightweight and weighs in at around 75 kg (165 lbs).

In BC it is illegal to own a 100% wolf so all of the wolves we met had 2% German shepherd and/or Husky bloodlines bred into them. The pups are raised with a lot of human contact and are very well socialized and friendly.

In addition to the wolves, learners were able to see a coyote who had been rescued. Unlike the wolves, Wylie the coyote (what else could he have been called!) is not domesticated but cannot be returned to the wild as he has permanent damage to a leg and cannot hunt.

Several of the wolves have also been used in TV shows and movies such as Supernatural. The beauty and intelligence of these remarkable animals made it very hard for students (and adults) to finally depart. I think we all would have been happy to have spent many hours there. 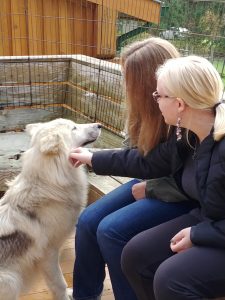 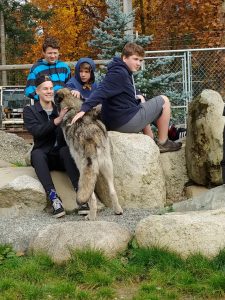 Brenda Fawkes
This momof7siblings and homeschooling veteran of 25yrs is a founding member of the RCOA Admin Team and Program Development Director. Current projects are: this website, the PIE Program, and Directorship of our F2F Classes in general.
Previous Post
Grad Activity and Career Fairs Near You!
Next Post
Featured Free Resources